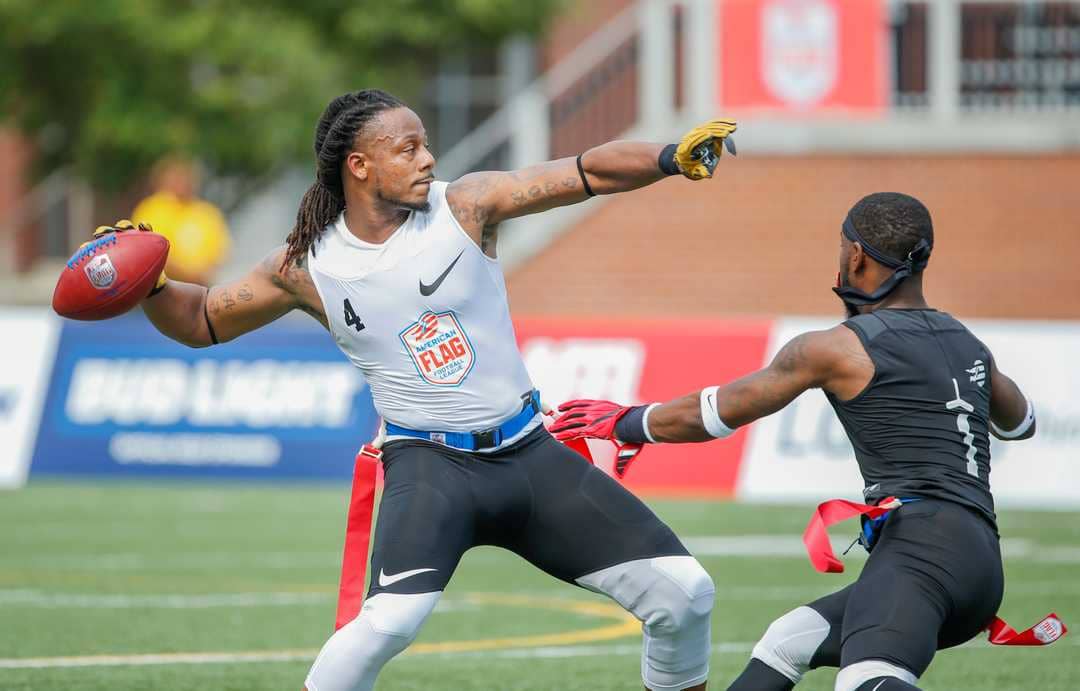 The Olympics are unlike any other sporting competition on the planet. For 16 days, over 300 events representing 35 sports and every country on the planet compete to take home their prized medals, and I have looked forward to watching the Summer Olympics every 4 years since as far back as I can remember. But there’s always been something missing. One of the United States most popular sports, and a top 10 sport throughout the world, it looks as though tackle and flag football could be Olympic sports by the year 2024, but issue obstacles still remain for that to become a reality. First we’ll walk through some reasons why the road to getting American Football included into the Olympics has not been an easy journey, followed by why we believe flag football to be the logical solution and choice as a future Olympic sport.

WHY ISN’T AMERICAN FOOTBALL ALREADY AN OLYMPIC SPORT?
According to an article by NFL.com, the biggest logistical problems facing the sport of American Football being included in the Olympics are very similar to that of Rugby. With the large numbers of participants on each team, the “gender equality” formats where both men and women participate in every sport, and the compressed 3 week schedule that would be tough with a more physical game like football and rugby. Furthermore for American Football, the barrier to entry is high due to it’s cost to equip all players with pads and gear, and therefor has also been slow to adopt in many foreign countries, especially of the poorer variety.

Knowing all this, it’s hard to see how either sport would be a good fit for the Summer Olympics. Rugby is a lot like Soccer in that very little is needed to play the sport in terms of gear and practice at it’s base level, and has a much larger international following. This among other reasons has recently allowed Rugby to be cleared for the Olympics starting in 2016 by changing the traditional style to a less traditional “sevens” format which is faster paced with less people, which could help carve a similar path for American Football, or flag football more specifically.

TACKLE SAFETY CONCERNS
Even more and more high school, college and pro teams are starting to reduce the number of contact practices, still sporting the likes of soft-padded headgear and shoulder pads for added protection. But what if we could limit the contact players see before high school and middle school while also addressing some of the concerns for the sport related to it being fully accepted into the Olympics?There’s a lot of talk recently revolving around the safety of tackle football, and not just in the NFL where concussions are a major concern. Starting as far back as the youth football level, recent evidence has surfaced supporting the idea that even short of a concussion, repeated head impacts and collision can manifest in similar brain injuries later in life for kids tested between the ages of 8-13. Many researchers are suggesting kids shouldn’t be playing football at all, suggesting that kids’ heads are “a larger part of their body, and their necks are not as strong as adults’ necks. So kids may be at a greater risk of head and brain injuries than adults.”

DREW BREES BELIEVES FLAG FOOTBALL CAN SAVE FOOTBALL
As of 2015, studies show that flag football is the fastest growing youth sport in the United States, greatly outpacing the growth of traditional tackle football. Many individual high schools are making the switch to flag football over tackle, getting other schools in their regions to follow suit creating organized leagues and divisions. It’s even an officially recognized varsity sport in many states, and with women especially flag football is a way to allow easier participation versus the physical nature of tackle.And he’s not the only one. Recently Drew Brees was interviewed by Peter King for NBC’s pregame show and had some strong words on why he believes flag football is the answer. “I feel like flag football can save football,” Brees said. Brees coaches his son’s flag football team, and played flag football himself through junior high, never playing tackle football until high school. “I feel like (flag football) is a great introductory method for a lot of kids into football,” Brees mentioned. “Otherwise I feel it’s very easy to go in and have a bad experience early on and then not want to ever play it again. I feel like once you put the pads on there are just so many other elements to the game, and you’re at the mercy of the coach in a lot of cases too. And to be honest, I don’t think enough coaches are well-versed enough in regards to the true fundamentals of the game especially when the pads go on at the youth level.” Many other pro athletes and coaches have expressed similar sentiments as well, singing praises for the sport of flag football, and the rise in popularity of the sport echoes that.

Flag football isn’t a fluke or just a recreational development tool that feeds into tackle football, it’s a full-fledged movement that has it’s own identity and purpose and it’s time we recognized that distinction.

Internationally it is gaining popularity as well, much faster it seems than traditional American football where the barrier to entry is much higher with the need for full pads and gear. In Mexico for instance, flag football is booming in popularity, where most consider it to be the #2 sport to soccer and closing fast, with and estimated 2.5 million kids participating just at the elementary school level. International teams are starting to make the trip to some of the more popular American flag football tournaments, with representation from Panama, Indonesia, Bahamas, Mexico, Canada and more a common occurrence.

Everywhere you look, participation and interest in the sport flag football is exploding.

At an adult level, it was a record year for the sport of flag football. New major tournaments are popping up across the world, seeing thousands of teams competing across all age groups, formats and styles. Cash prizes have been at an all time high, expected to eclipse over $100,000 in team giveaways in the next calendar year. Sponsors have started taking notice as well, with the likes of EA Sports, Nerf, Hotels.com, Red Bull and other major brands seeing the value and growth from flag football as a way to effectively reach their target audience in large numbers. Women’s participation is at an all-time high as well, mirroring it’s popularity at the youth level, and is the preferred format of play for American football in most Central to South American countries.

So how does this all lead back to the Olympics and getting American football included as an official sport? First, let’s review a little history on where the sport stands today with the International Olympic Committee, or IOC.

Historically, In order to be included into the Olympic games as a demonstration sport, you have to have an International Federation and have held a World Championship competition. This must take place a minimum of 6 years before a scheduled Olympic games. The International Federation of American Football, primarily focused on tackle football but includes flag in it’s tournament lineup, met this standard and was approved in 2012, and gained provisional recognition in 2014. This could pave the way for American football to be included as an official sport, and flag football as possibly a discipline of said sport, however the IFAF has since faced setbacks due to alleged scandal, event mismanagement and misappropriation of funds that cannot bode well for the sports inclusion short term. Fortunately in 2007 the IOC adopted a new, more flexible rule set allowing programs to be up for review after every Olympics starting in 2020, clearing a path for all sports to present their case for being included by winning a simple majority vote.

So the opportunity is there for American football to be included in the most prestigious sporting event around the world, but how do we overcome the obstacles presented by the structure of the sport to fit the mold of a successful Olympic sporting event?

FLAG FOOTBALL IS THE KEY TO OLYMPIC INCLUSION
For every way tackle football doesn’t fit the mold as a logical choice for the IOC, there’s flag football. Here are the top 4 reasons flag football should be considered to be included as the next Olympic sport.

As we’ve already established, flag football is a much safer alternative than tackle football. Less hits and collisions equal fewer injuries, and flag football is already a proven success model that’s being praised for preserving the game for future generations. But when it comes to the Summer Olympic Games, safety is just one aspect of the physical demands of the sport, considering you have less than a 3 week window to fit in all levels of competition, and the year-round activity needed to practice and qualify. Imagine playing 6-7 full contact football games with a limited roster all within a span of ~16 days, not to mention other possible qualifying events throughout the year. For flag football, it’s not uncommon to play 6-7 games in a weekend or sometimes even a day, so the sport is more than equipped for this style of tournament play.

As mentioned above, this is a major issue when determining whether a sport is fit to be considered, and while traditional American style tackle football is extremely popular worldwide as well, flag football appeals to more countries. It’s a lower barrier to entry as far as cost and equipment go, don’t require full length and striped football fields to participate, and is easier to hold larger tournament competitions and leagues to inspire local interest.

Depending on which format would be used (our guess is either 5v5 or 7v7), flag football requires far fewer participants than traditional tackle football. Part of this is due to it being a less physically demanding sport and the need for less substitutions, and another part is due to needing less specialist players, such as kickers, punters, special teams, offensive lineman, etc. Where each traditional tackle football team would probably carry 50+ competitors, flag football would need probably 15 players at most, cutting that number to less than a third. This is important because the Olympics cap their total participants to 10,500 athletes and coaches. It also again allows more countries to compete, especially poorer countries, where fielding a smaller and less financially demanding team coupled with the reasons above makes more sense.

Gender equality is a major emphasis for the IOC. The 2012 Summer Olympics marked the first time all sports included competing women in their category. Today, any new sport that is added to the Olympic Games must include both male and female participants. For tackle football, there is just not nearly enough interest from women participators for it to make sense. While there are some female players, and even some female tackle football leagues and organizations, it just doesn’t fit the mold, especially with the other issues relating to physicality and barrier to entry. For flag football this is not a problem as detailed above, with female participation booming internationally.

NEXT STEPS FOR FLAG FOOTBALL AND OLYMPIC INCLUSION
So how do we take the next steps to ride the momentum of flag football straight into the next available Olympic games? The IFAF has already helped begin the process of getting the sport of American Football in front of the IOC in recent years, but with their public issues and seemingly no movement since 2014 more needs to be done to keep moving forward. What we do know is that flag football is being taken seriously at all levels for really the first time in history, with major organizations making moves to get more into the flag football space and the creation of bigger and more international events to fuel the sport. We believe that either on it’s own, or as a discipline of tackle football, flag football WILL be included in the Olympics at some level in the next 10-20 years.